The Bank Of Austin Charts A New Financial Course With Focus On Small, Mid-Sized Businesses 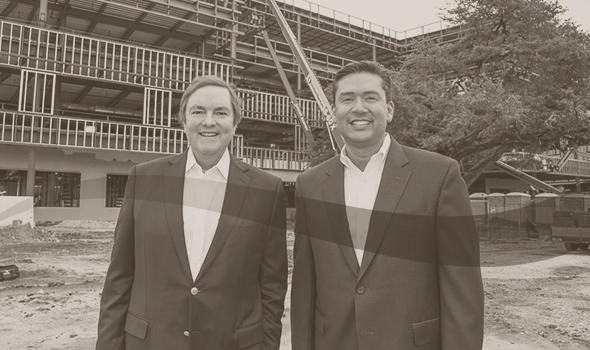 After nearly a decade of silence, the first rumblings of startup activity in Texas’ community banking sector can be heard on a small patch of land in North Austin, off MoPac Expressway in the shadow of the U.S. Highway 183 flyover.

In the rising concrete slabs and steel beams of a new office building, the future home of The Bank of Austin is taking shape. It is poised to become the first brand new bank built from the ground up in Central Texas — and the entire Lone Star State — since 2009.

That was when the Texas Department of Banking last approved a “de novo” charter, the name applied to new banks started from scratch.

The Bank of Austin’s application received the OK from the state May 9. The Federal Deposit Insurance Corp. still needs to weigh in — the application was still pending May 23 -— and executives have also applied to the Federal Reserve System to recognize the bank’s parent company, Capitol of Texas Bancshares Inc.

But The Bank of Austin executives said they should be ready to open in early July, debuting the state’s first new bank since baseball great Nolan Ryan and crew opened Round Rock-based R Bank in 2009.

Since then, there have only been three more charters granted nationwide: one apiece in 2013, 2015 and 2017, according to data from SNL Financial.

There is demand for more lenders focused on small business in markets such as Austin, said Dan Bass, managing director of investment banking in the Houston office of Chicago-based Performance Trust Capital Partners LLC.

There are currently seven charter applications pending nationwide, including for The Bank of Austin.

“If you have a good business plan and can show the regulators that your targeted client base isn’t being served by the existing banks then you can get a charter,” he said. “There aren’t a lot of independent community banks in Austin servicing the small business owner so it makes a lot of sense for one to get started.”

The largest bank headquartered in Central Texas ranked by total assets is First Texas Bank, based in Georgetown, with $1.35 billion in assets as of March 31. Pioneer Bank follows close behind at $1.17 billion in assets (see chart page 8). Large outside banks such as Wells Fargo & Co. and Bank of America Corp. hold billions of dollars in local deposits and control much of the consumer market share.

STANDING OUT IN A CROWD

The Bank of Austin will “strive to create relationships with those businesses and individuals that would prefer doing business with the Bank, rather than the branches of regional, national or international financial institutions,” organizers said in the charter application filed with the FDIC.

The bank has leased about 13,000 square feet inside MoPac Centre, which is under development at 8611 N. MoPac Expressway, the former site of Shoal Crossing Events Center.

The building’s owner is Eurus Capital Partners and White Construction Co. is the general contractor. Work is expected to be finished by November; until then, The Bank of Austin is temporarily based at the nearby Atrium Office Center, 8701 N. MoPac Expressway.

Bank executives are also looking for about 2,000 square feet in downtown Austin to open a loan office branch in the third quarter of 2018, according to the charter application.

“Once we have completed the chartering process and have taken all of the necessary steps to open The Bank of Austin, then we will turn our attention to looking at a location along the Congress Avenue corridor, somewhere in downtown Austin,” Bugg said. “We feel like that is a very important location for the future of The Bank of Austin as well.”

The Bank of Austin’s president and CEO will be Jon Eckert, previously a senior vice president in Austin for Comerica Bank and manager of its Central Texas commercial banking group, working with businesses with annual revenue of $2 million to $350 million. Eckert also spent 10 years apiece at BBVA Compass and Bank of America Corp.

Because of low overhead costs incurred with a single location, The Bank of Austin can afford to spend more time advising customers, even if they only have a small deposit. Many corporate banks use retail bankers to service small and medium-sized businesses and reserve their commercial bankers for mid-market companies and above.

“Most regional and large banks can’t financially justify using their most experienced, highly trained employees on smaller operations because the returns just aren’t there,” Eckert said. “We want to be strategic partners for those businesses that probably have never experienced such a level of service before.”

“We have an average of 29 years of banking experience,” Eckert said. “We’ve seen, working at other banks, that this is an underserved market.”

When executives announced the bank’s formation in December, they said they intended to raise as much as $40 million initially. Bugg said earlier this month that The Bank of Austin has already received interest from 100-plus investors willing to provide up to $47 million. The private placement is still being finalized but Bugg said the individual investors are mostly from Austin and represent a wide range of ages and sectors including tech, business services and real estate.

That pool should be enough to get the bank off the ground and cover its asset and deposit growth for the first three years of operations, organizers wrote in the charter application.

The minimum investment in Capitol of Texas Bancshares was $100,000 up to a maximum of $1 million.

Bugg said 97 percent of San Antonio customers use electronic tools to manage their money, so its retail presence is purposefully curtailed.

“The Bank of Austin is going to be a tech-focused bank in terms of our operations and delivery of services,” he said. “Business owners and people who work in locally based businesses are too busy nowadays to leave their office, get in a car and drive all the way to the bank.”

There are 464 banks chartered in Texas — down from 644 eight years ago, at the peak of the Great Recession, because of industry consolidation, bank failures brought on by the recession, and a slowdown in charter applications.

“The formation of this new state bank is a very positive sign that community leaders are again seeing the advantage of a locally owned and managed financial institution. The Texas economy needs a strong community banking system to provide credit opportunities to small businesses and consumers,” Texas Banking Commissioner Charles Cooper said in a statement.

Those advantages include a simplified organizational ladder, Eckert said. Instead of reporting to directors in New York City or San Francisco, his focus area will remain zeroed in on the Texas capital.

“We only have an Austin agenda,” he said. “We’re not subject to outside forces or influences. I’ve been through that so many times before: Something happens somewhere else in the country that affects the entire organization. We’re only focused on making sure we take care of clients here in Austin and the surrounding area.”

The Bank of Austin’s six directors will contribute at least $4.2 million to its initial capital pool, which is currently an over-subscribed $47 million. The seasoned businessmen “are a professionally diverse group of successful business executives who will use their contacts and business acumen to contribute to the success” of The Bank of Austin, according to the bank’s charter application: